Home / About Us / Musicians / Pianists 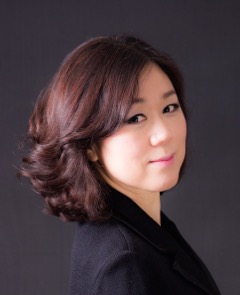 Eunmi Moon was highly praised by The Monitor, an Illinois periodical, who said, “Ms. Moon has a unique style of playing which is tasteful, doesn’t overcome the soloist, yet manages to reach the musical heights.  Her technique is spotless and her dynamics come through with lyricism.” The Philadelphia Inquirer also lauded, “Accompanying with sensitivity and skill throughout” As a collaborative pianist, She has lent her talents to singers and instrumentalists at New York’s Alice Tully, Merkin, Carnegie/Weill Recital halls, the 92nd Street Y and Colden center, Philadelphia Convention center, Bartlesville Performing Arts Center as well as countless music series in museums and libraries. Ms. Moon has performed in major cities throughout the United States under the auspices of Community Concert Series sponsored by Columbia Artist Management. She has also performed in Korea, Japan, Puerto Rico, Switzerland, Austria, France, Guatemala, Mexico, Norway and Argentina. Ms. Moon frequently collaborates with the acclaimed soprano, Theresa Santiago, a winner of the Naumburg Competition. They recorded ‘Spanish Songs’ on the Musical Heritage Society label.

The recipient of numerous awards and scholarships, she made her Carnegie/Weill Recital Hall debut as a winner of the Artist International Competition in the Piano/Cello Duo Category. A graduate of Seoul National University, Ms. Moon was the first Korean student to receive a Master of Music degree in Collaborative Piano from the Juilliard School, where she subsequently worked as Associate Coach at the school’s famed Juilliard Opera Center. She was also a vocal coach at Manhattan School of Music. She is a doctoral candidate at Teachers College, Columbia University, where she has received her second Master’s degree in Music Education.

She is currently teaching at Monmouth University and a Co-Adjunct at Rutgers University. 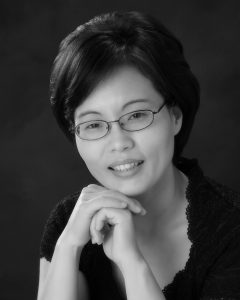 Born and raised in Seoul, Korea, Sojung Lee Hong studied piano at Seoul National University, where she received the President’s Award at graduation. After obtaining a doctoral degree in piano performance and literature at the University of Illinois at Urbana-Champaign, she joined the music faculty of Judson University, a Christian liberal arts institution located in the northwest of Chicagoland (www.judsonu.edu). For the past twenty years, she has taught applied piano, piano literature, pedagogy, and history of worship music at Judson University. Maintaining a dual career as an educator and performer, she has given numerous solo, duo, and chamber music performances at universities, churches, libraries, and performing arts centers in the United States and Korea, including lecture recitals at conferences of College Music Society and Illinois State Music Teachers Association. She has been the Director of the Performance Certificate program at Judson University since 2008 and organized the annual benefit concerts to provide scholarship money for the gifted international students who cannot afford their education costs in the US. She also released two CDs to support the institution’s scholarship funds; ‘Whispers from Heaven’ and ‘Tranquillity’ (https://mkt.com/dcwpa/).

Sojung accepted Jesus Christ as her Savior at her early age and was baptized at Somang Presbyterian Church, Korea. Her love for Jesus has led her and like-minded friends to visit Cambodia, Peru, Mexico, Hopi Reservation in AZ, and hospitals in Chicagoland to share the Gospel through teaching and performing music. Starting as a member of a children’s choir at church, she has served local churches as an accompanist, choir conductor, and singer throughout her life. Currently, she is a member of the Chancel Choir and a ministry worker for the STARS Choir (disability ministry) at College Church in Wheaton, Illinois. 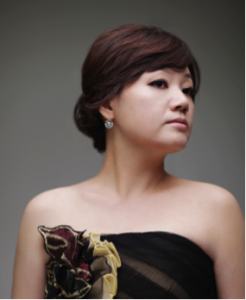 Dr. Han received her D.M.A. in Collaborative Piano at the University of Maryland at College Park (UMCP), studying under Rita Sloan, who founded and directs the collaborative piano program at the Aspen Music Festival. Her doctoral dissertation was on innovations in French chamber music and melodie – through a collaborative pianist’s perspective – exploring the role of piano in accompaniment. Dr. Han also earned her Master of Music degree in Piano Performance from UMCP and her Bachelor of Music degree in Piano Performance from George Mason University. While studying at UMCP, she held positions as the pianist for the University Symphony Orchestra, the accompanist for the Chamber Singers and the Maryland choir, and the pianist coach for the UM Opera Studio. Additionally, Dr. Han received the McCoy Award for Collaborative Pianist and First Place in the Ulrich Competition at UMCP. She also received a rave review from the Washington Post for her performance of Mozart’s opera, The Impresario, at the Clarice Smith Performing Arts Center. As part of the “Songfest” in Malibu, California, under the tutelage of Martin Katz, she premiered pieces by distinguished composers including Jake Haggie and John Harbison.

Dr. Han has extensive experience as an accompanist and a chamber musician, performing in numerous concerts and recitals throughout the United States, Korea, China, and Japan. She frequently plays in the U.S. Air Force Chamber Music Series recitals and has traveled abroad to perform with choral, vocal and instrumental chamber groups in Mexico, Thailand, Cuba, Costa Rica, Turkey, Kazakhstan, and Kyrgyzstan. She actively performs as a collaborative pianist for both vocal and instrumental recitals throughout the Greater Washington Metropolitan area, as well as in New York. In 2017, she founded the Kalos Trio (along with violinist Yoojin Baik and cellist Hyunji Choi) and organized the Benefits Concert for the Homeless at the historic New York Avenue Presbyterian Church in Washington, DC, performed Vivaldi’s Four Seasons as part of the Angel’s Concert Series at the Church of Holy City in Washington, DC, and performed Mendelssohn’s Piano Trio No. 2 at Carnegie Hall in New York City. 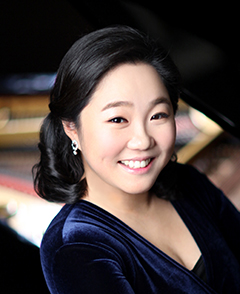 Young Park is a Steinway Artist. Most recently, she performed seven concerts in five different cities in Turkey with violinist Grace Wollett. Also, she won the fourth prize at International Beethoven Piano Sonata Competition and she received her Doctorate of Musical Arts degree from The Mason Gross School of the Arts at Rutgers University with Min Kwon.

She has presented a monthly concert series, “Young Park & Friends,” at James Lenox House Association in New York City since 2007. She is also a correspondent for Piano Magazine/ String & Bow in Korea since 2006. She is a founding member of Duo Pathos and Trio Venia. She is a head faculty at Angelos Mission Ensemble and a faculty member at The Laus Chamberfest in New Jersey. She also has Young Park’s Piano Studios in New York City and New Jersey. On Sundays, she serves as a pianist at Morningside Church in New York City.

Besides playing the piano, Dr. Park enjoys swimming, reading, traveling and cooking. Her favorite bible verse is Psalm 150:6. ” Let everything that has breath, Praise the Lord. Praise the Lord.” 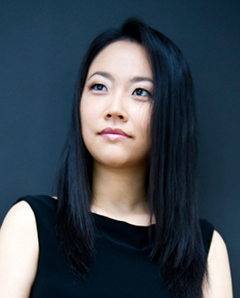 Pianist Mira Kim, a soloist, chamber musician, and teacher, began studying piano at the age of four and immediately showed her extraordinary talent, winning first prize at the Se-Kwang Piano Competition at the age of seven. After receiving her Bachelor of Music in Piano Performance with honors from Chu-Gye University for the Arts in Seoul, Korea, she earned her Artist Diploma in Piano Performance from the University of Northern Iowa, where she received a full-tuition scholarship and an assistantship in accompanying for the department of opera and vocal studios. She earned her Master of Music degree in Piano Performance from Manhattan School of Music where she also worked as an accompanist for opera and vocal studios in the Pre-college Division. In addition to performing actively as a soloist, recitalist, and chamber musician in New York, Ms. Kim also performs throughout the United States, Canada, Argentina, Mexico, and South Korea at many renowned concert venues. These include Carnegie Hall’s Weill Recital Hall, Merkin Concert Hall in New York City, Greenfield Hall, Davis Hall, the Great Hall (GBPAC), Munhwailbo Hall in Seoul, Teatro Armando Manzanero in Yucatan and Anfiteatro Eva Perón in Buenos Aires.

Since her solo debut appearance with the São Paulo Symphony Orchestra at age 16, Korean- born pianist, Eun Ae Baik-Kim, has performed extensively as a soloist and chamber musician in the South America and the USA. She has won numerous competitions such as the Chautauqua Piano Competition, Concurso para Jovens Solista , Concurso Estadual para Instrumentistas e Cantores. She has received the Diploma de Honra for distinguished artists from theConservatório Carlos Gomes. Dr. Baik-Kim was the youngest pianist to perform at the significant concert series “Suite Iberia de Albeniz,” a broadcasted festival sponsored by the Spanish Consulate in Brazil. Her premier compositions include “Pilgrimage”, a piano trio by Robert Pound, as well as those by Dennis Ritz and Donovan Stoke.

As a recipient of the Performing Accompanying Grant at Temple University, she had the opportunity to develop her skills as a collaborative pianist under the guidance of renowned pianist Lambert Orkis. She further continued her studies with Rita Sloan at the University of Maryland to earn a Doctor of Musical Arts.Her primary teachers include Sung Ae Kang, Hae Sun Ahn, Harvey Weeden, George Sementovsky, Edward Roberts, David Burge, Gilberto Tinetti, Lambert Orkis and Rita Sloan.

Dr. Baik-Kim is currently a professor of music at Dickinson College, a devoted teacher and an avid collaborative artist. She performs extensively throughout the year covering wide range of repertoires from Baroque to the 21st century music of the vocal art songs and instrumental chamber music. She has performed with the Dickinson College Community Orchestra, the West Shore Symphony Orchestra and the York Symphony Orchestra. She was also a lecturer at Bucknell University and has actively served as an adjudicator for competitions and music festivals. Eun Ae Baik-Kim joined Music From Above in 2018.