Home / About Us / Musicians / String & Woodwind 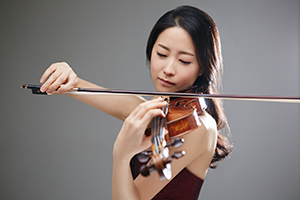 Praised for her eloquent and passionate performances, Korean-born violinist Ye-jin Han made her New York recital debut in 2009 at Carnegie Hall’s Weill Recital Hall. She has performed throughout the United States, Canada, Europe, Japan, South America, and Korea and has been prize winner at many competitions including the First prize at the Five Towns Music and Arts Foundation Young Musician Competition in New York, and the Special Prize at the Citta di Brescia International Violin Competition in Italy. From performing on period instruments with the Stony Brook Baroque Ensemble, to world premiere performances with the Contemporary Chamber Players, Dr. Han’s diversity and flexibility has been captivating audiences around the world.

Dr. Han began her studies in violin and piano at the age of seven, and attended the Yewon School, Seoul Arts High School, and Seoul National University in Korea. She won top honors from the Korea Times, Chosun National Daily, and the Youth Chamber Music competitions and appeared in concert at the Young San Arts Center, Kum Ho Arts Hall, and Seoul Arts Center. She also performed as soloist with the Modern Chamber Orchestra in Seoul, Casalmaggiore Chamber Orchestra in Italy, and Bergen Symphony Orchestra in New Jersey, where she currently serves as a concertmaster.

An avid and passionate chamber musician, Dr. Han has been a prize winner of the Lilian Fuchs Memorial Chamber Music Competition in New York, and has performed with many acclaimed ensembles including the members of Emerson String Quartet, and the New York Classical Players. She has collaborated with artists such as Lucie Robert, Soovin Kim, Vladimir Dyo, Gorjan Kosuta, and Arthur Haas, and has appeared at the Banff Centre, Tibor Varga, Mozarteum International Academy, Carl Flesch Akadimie, Fontainebleau Schools, and Casalmaggiore festivals. She has also appeared in masterclasses for world renowned artists including Aaron Rosand, Joel Smirnoff, Viktor Pikayzen, Igor Ozim and Igor Oistrakh.

A sought-after pedagogue, Dr. Han is an active and committed educator who has been invited to teach Masterclass at Dickinson College as a guest artist and also at summer festivals including Lyra Music Festival & Workshop, Seoul International Music Festival, Maeil Chamber Music Festival, and Harbor Front Chamber Music Festival. She has taught undergraduate violin and chamber music at Stony Brook University and has been on faculty at the North Shore Suzuki School, Music Academy of Long Island, and the Long Island Conservatory of Music. Chamber groups she coached won New York International Music Competition two years in a row and she also holds a private studio, which has produced many competition winners and musical leaders at State/local youth orchestras.

Clarinetist JIHOON CHANG was born in Seoul, Korea and immigrated to the United States in St. Louis metropolitan area. He earned his bachelor’s degree in music performance from the University of Illinois in Urbana-Champaign, where he received the Theodore Presser and A.A. Harding Awards. His master’s degree was earned from the Eastman School of Music in Rochester, NY, where he received a Performer’s Certificate. His DMA degree was completed at the University of Maryland in College Park in 2010, where he was a concerto competition finalist and a recipient of

an honorable mention in the Homer Ulrich Competition.

Doctor Chang has recently retired from “The President’s Own” United States Marine Band, located in Washington, D.C., where he was frequently involved as a chamber musician, clinician, and soloist. In 2004, he performed a transcription of Tchaikovsky’s Violin Concerto on their extensive 7-week national concert tour. And in 2008, he performed John Williams’ “The Tale of Viktor Navorski” from The Terminal, with the composer conducting in a gala 210th anniversary concert at the Kennedy Center for the Performing Arts. In 2016, he gave a world premiere performance of Eric P. Mandat’s “Parallel Histories” at the Capitol grounds and the Sylvan Theater by the Washington Monument.

In 2010-2015, he was the Professor of Clarinet at Howard University, and in addition to the soprano clarinet, he has also performed and taught the bass clarinet, alto and tenor saxophones, and flute. He has recently been appointed as a contributing faculty at Dickinson College in Carlisle, PA.

Cellist Hyun Ji Choi enjoys a versatile career as a soloist, chamber musician, and orchestral  player. She has been heard in venues as diverse as the Alice Tully Hall of the Lincoln Center,  Weill Recital Hall at Carnegie Hall, and Smithsonian Museum in Washington D.C. to name a  few. Her artistry has taken her to perform in South Korea, Japan, Canada, Mexico, and Argentina  as a soloist and a chamber musician. While living in Chicago, she performed a wide selection of  solo cello and chamber music repertoires as a member of Apas Duo/Trio, appearing as a frequent  and regular guest in many of the recital series and educational programs in public libraries,  hospitals, and community centers in the region. She was a member of the Grand Rapids  Symphony in Michigan and now appears as a substitute musician for the Baltimore Symphony  Orchestra.

As a founding member of Duo Pathos, flute and piano ensemble, she gave a debut recital at Carnegie Weill Recital Hall, New York, USA, presented by the Artists International in 2008. She has performed as a soloist with the National Academy Orchestra of Canada, and Yucatan Youth Orchestra of Mexico.

Ms. Huh completed her Bachelor of Music degree at University of British Columbia in Vancouver, Canada, Master of Music degree at The Juilliard School in New York, USA, and Master of Arts degree at the Royal Academy of Music in London, England. Her teachers include Lorna McGhee, Carol Wincenc, Camille Churchfield, and Kate Hill.  She has performed in masterclasses given by Sir James Galway, William Bennett, Maxence Larrieu, Jonathan Snowden, and Mathieu Dufour.

Meza has participated in festivals and masterclasses where he played for world renowned trumpetists such as Uwe Koller and Matthias Höfs of Hamburg Opera Orchestra, and Giuliano Sommerhalder of Royal Concertgebouw Orchestra. He has also studied with Tom Rolfs, Principal trumpet of Boston Symphony Orchestra.