Home / About Us / Musicians / Vocalists – Soprano 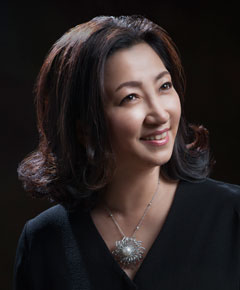 Ms. Kim has delighted audiences with her concert and operatic performances throughout Europe, Asia and the United States. She made her professional recital debut in her native Seoul, Korea. Her European debut took place in Vienna, Austria with the Richard Wagner Opera Society. Following her debut, she sang in many performances as a soloist with the esteemed Maestro Agnoletti.

Internationally, she has performed numerous solo recitals and taught Master classes at such places as the Dream Art Center in Beijing, China and Sias University, Zengzhou, China. Her recital was the first professional Western recital ever given in Hunan province, China.

Ms. Kim has been touring for past few years with Music from Above Foundation and has taught masters classes and performed in orchestral and televised performances, such as “Concierto con Orchestra Sinfonica Juvenile de Yucatan” in Merida, Mexico; Anfiteatro Eva Peron del Parque Centenario in Argentina; Universidad Mariano Galvez in Guatemala; and in Paraguay. She performed in Turkey and Almaty, Kazakhstan in April, 2014.

Known for her elegant interpretations, she has performed in many productions, particularly singing the role of Violetta in La Traviata, Mimi in La Boheme, the title role in Madama Butterfly, Liu in Turandot, Magda in Pucchini’s La Rondine, Micaela in Carmen and Pamina in The Magic Flute. As an oratorio/symphonic soloist, audiences have also enjoyed her performances of Beethoven’s “Ninth Symphony,” Haydn’s “Creation,” Mendelssohn’s “Elijah,” and Handel’s “Messiah” at esteemed venues, such as Avery Fisher Hall (Lincoln Center) and Carnegie Hall.

Frequently singing in the concert series with the Westchester Symphonic Winds in Tarrytown, New York, Ms. Kim most recently performed in a program entitled “Ayre & Space,” as guest soloist in November 2015. She also performed in the “One Month Festival” in Washington DC, which is a program with artists performing in 27 countries over a one month period.

She will be performing with the Ureuk Symphony at Merkin Concert Hall in New York City September 2016 and in Rio de Janeiro Brazil in March 2017.

Ms. Kim received her Bachelor’s degree from Seoul National University and her Master’s degree in Voice from the Manhattan School of Music.

Eunjoo Lee Mezzo-soprano has been extolled in many roles including Carmen, Dalila, in Samson et Dalila, Suzuki in Madama Butterfly, and many other appearances with various opera companies throughout United States and her native Korea. These companies include New York City Opera, Opera RoanokeVirginia, Des Moines Metro Opera, and, Duluth festival Opera, Opera Florham, Seoul National Opera, Seoul City Opera, Daegu Opera, and among others. Critics have described her interpretations as “brilliant,” “impressive,” and that “”She has a big warm voice and sympathetic presence drawing the greatest applause from the audience.” She was born in Seoul, Korea, after her education in Korea; Ms Lee studied and earned her Artist Diploma (Equivalent as Master’s Degree) at St. Cecilia and Licinio Reficeo Conservatory in Italy.

Il Ryoung Lee, soprano, received her Bachelor’s defree in voice at Seoul National university where she studied with Ms. Hae Kyung Kim. She obtained her Master’s degree in Music from the graduate school in Sungshin Woman’s University, where she worked with Ms. Hwa ja Hwang. After she came to America, Il Ryoung Lee received Master’s degree in Music(M.M.) from The Juilliard School under the tutelage of Mr. Daniel Ferro. During her study at The Juilliard School, she was the recipient of the Philo Higley Scholarship and the Phyllis Joan Hoyland Memorial Scholarship from that school. She continued to study in voice in Professional Studies Program at The Mannes College of Music, where she has studied with Ms. Bonnie hamilton. She has earned her certificate of Professional Studies from that College. Also she studied in doctoral program at CUNY.

Ms. Lee was a winner in the Dong Ah Music Competition. She has appeared in a variety of concerts such as voice recitals, Joint recitals, Sacred music recitals, master classes, operas, and a lot of fund raising benefit concerts. She also has toured several cities throughout the South America as well as the United States for the benefit concerts. Her command of the soprano opera repertoire includes Le Nozze di Figaro, Louise, and Die tote Stadt.

Her numerous and diverse experiences include Music instructor at the Long Island Conservatory, Music teacher at the New York Korean School, and Choir conductor for The New York Hwa Kwang Methodist Church.

After Ms. Lee came back to Korea in 2009, she has developed her career as a performer and teacher continually. She has performed two solo voice recitals at Youngsan Art Hall and Seoul Art center and has been active in the various concerts in Korea. Besides, she has broadened her experiences as a Choir conductor. Now, She is a conductor of the Artos Singers and Jinmyung Alumnae Choir.

She is currently working as a professor at Sungsan Hyo University. She is also teaching as a voice faculty at Seoul National University, Sangmyung University, Sungshin Women’s University, The University of Suwon, Sungkyul University, and Seoul Arts High School.